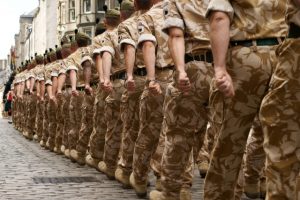 Major Cobb was my husband’s school army cadet commanding officer, whose pep talks have stood him in good stead throughout his life.

At the start of my husband’s army cadetting, when he was 14, Major Cobb said to him, in his posh, received pronunciation accent:

“Shooting rifles and getting covered in mud may not be for you, but I say: have a go, you might like it!”

My husband did have a go, and liked some of it, but not enough to follow in his mentor’s well shined boot-steps. However, it has become a legendary phrase uttered in our house at the slightest sign of resistance to trying new things: “have a go, you might like it’. There is much rolling of teenage eyes as a result – such fun!

But it does help broaden horizons with new experiences and give you a boost when you’re putting something off, because you’re a little bit scared.

So, swing Major Cobb into action when you’re dithering over saying yes to an opportunity to raise your profile.